When I found out that one of the girls from our household was going to be awarded the Tyger’s Eye, I had to request the scroll assignment. Boudicca routinely volunteers to waterbear, retain for royals, and anything anyone needs help with, always. And she does it all eagerly and cheerfully! I was beyond excited to get the assignment.

At first, I considered doing an early period scroll, maybe something norse because she tends to dress and act a bit norse. Boudicca is a student to Master Edward dos Scorpus and while she is already fierce, committed, and steadfast with her volunteering, I also know that she likens herself to a barbarian. So, while in my still-browsing-for-inspiration stage, I came upon this image: 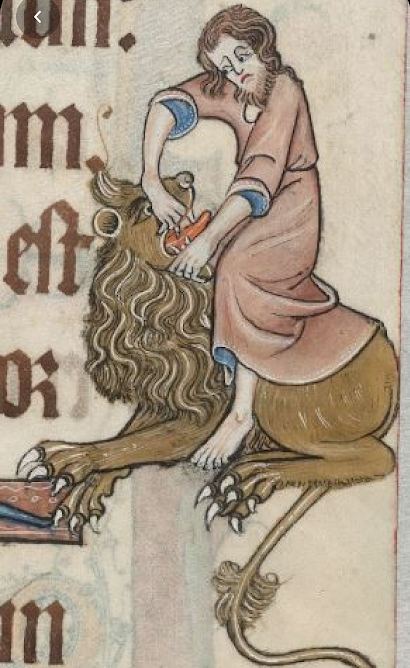 Yes, a man, tackling a lion and pulling apart his jaws. OR I thought, it could easily be a girl forcing a blue Eastern Tyger to drink water, like Boudicca often does. I was officially inspired and decided to use the Luttrell Psalter. If you aren’t familiar, it’s a manuscript from 14th century England with beautiful illuminated margins of fierce and silly beasts, and fun calligraphy. While it isn’t technically her persona, I think her persona is very flexible at this point. 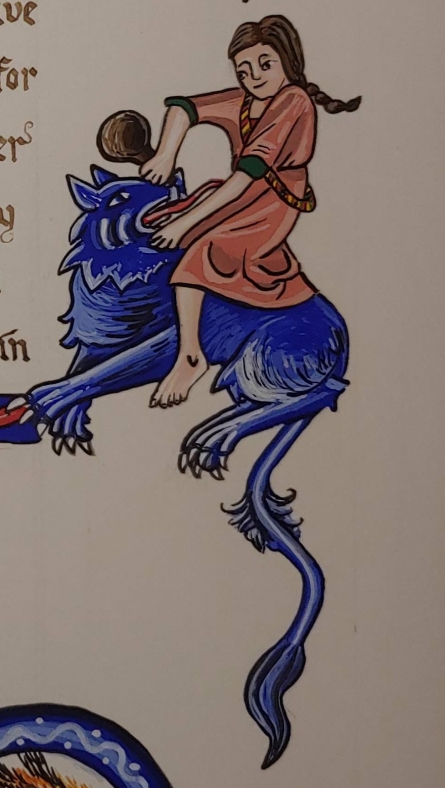 With this piece, I really wanted to work on making the scroll have a very accurate looking design and clean white work and outlines. I knew that if I missed the mark on any of those things, the piece would definitely look lackluster. Aside from a couple critiques my laurel game me, there is just one spot that I wish I would have gone back to and painted over and redid but otherwise I am pretty happy with the piece. 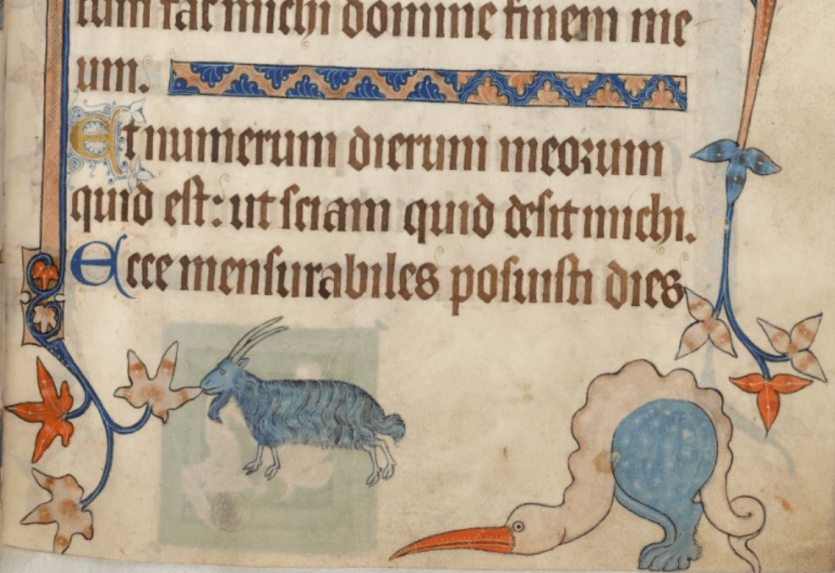 Words by Matthew MacGyver (below)

Calligraphy and Illumination by myself

Revered are the Mighty youth of the east And Feared are those who obtain the title of velociraptor, also known as Tiger cub. But further recognition is needed for the individual who kneels before Us this day.  Boudicca of House Fulton has distinguished herself as an unstoppable force for service. She is known as a helpful hand to friend and stranger alike, an eager and jovial retainer for past royalty, and a steadfast and often terrifying water bearer. Boudicca’s drive to serve her kingdom shines bright beyond her years. For this reason Queen Margarita has seen fit to add her into her Order of the Tigers eye, so that she may continue to serve as an inspiration to gentles of all ages.

Done this day A.S. 54 at A Market day at Birka, in the great barony of Stonemarche