I was absolutely delighted to get the scroll assignments for the Arts and Sciences Champions for Queen Margarita. I’ve had the opportunity to do champion scrolls before (these ones) and it’s fun because it feels like I can be a little more free with my design. Immediately, I thought this could be a great opportunity to do a couple of tiny scrolls!

After much research and contemplation, I found this adorable book, The Imhof Prayerbook. It’s a 16th century Flemish prayerbook, only about 90 x 62mm, meant to be carried around by its owner. I really fell in love with this adorable and tiny book.

I had some challenges though. I had to make it a little bigger to fit the text (with a line for the recipient and a line for the Queen’s signature, both to be filled in at the event.) The final size of my piece ended up about 120mm tall. I really wish I could have made it the right size, but maybe that’s a goal for next time! 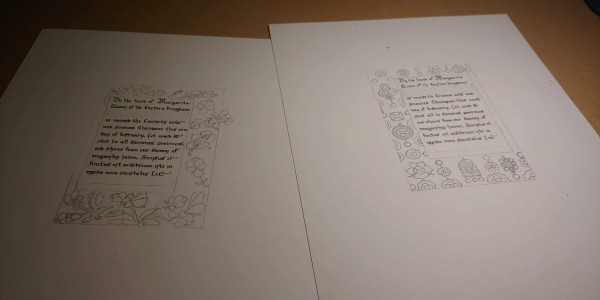 I also spaced the background pattern of the Crown’s Champion scroll a little bigger than I wanted. That was partially because I found a tool that I could use to keep the spacing consistent, not realizing just how wide it was. And, also about the background on the Crown’s Champion scroll, the shading was too light. This was really disappointing to me because it looked right just until I got the rest of the paint on the paper. Now it looks faint.

The last thing I want to mention is just something that I missed in the details until after. The original painting is done as if the borders are raised and because of that, the 4 sides are not outlined the same. Two sides are darker and two sides are lighter. This is something I should have picked up on but I unfortunately didn’t.

I did really like working small. And I really like doing this style of art with the gems, bugs, and flowers. I think it was an additional challenge to have to work the shading so tiny but, with the right brush, I think it was manageable. I think with even more practice, I will be able to get my lines thinner, or I may experiment more with using a nib.

I have also been working on my calligraphy and even though it doesn’t match the original manuscript perfectly, I still like it. I had fun making little flourishes on the letters or at the end of lines. I really like my last flourish on both scrolls. I do, however, have ideas on how it could improve but I think I will be working on my calligraphy for a very long time! 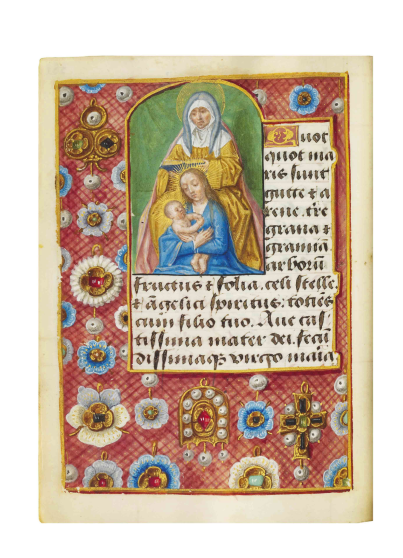 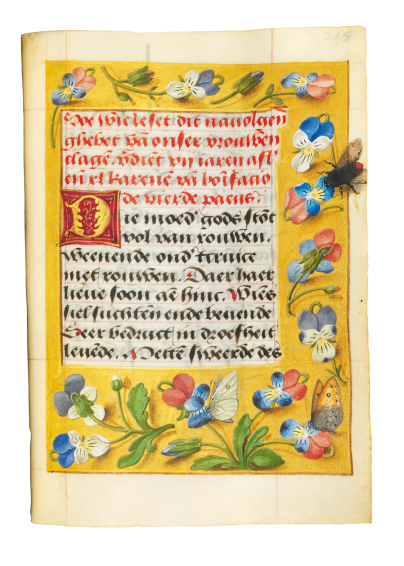 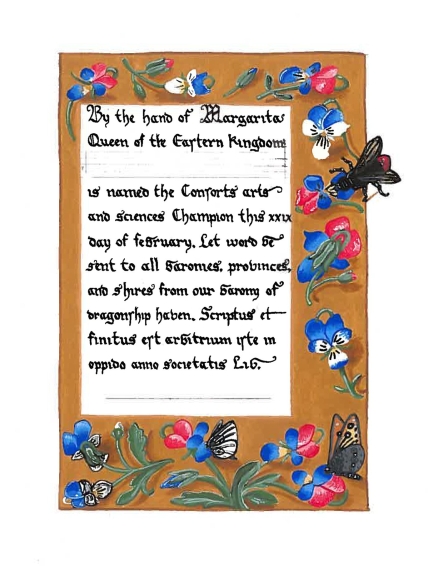 “By the hand of Margarita, Queen of the Eastern Kingdom, <name of recipient> is named the Crown’s Arts and Sciences Champion this 29th Day of February.  Let word be sent to all baronies, provinces, and shires from Our Barony of Dragonship Haven. Scriptus et finitus est arbitrium iste in oppido Anno Societatis 54.

By the hand of Margarita, Queen of the Eastern Kingdom, <name of recipient> is named the Consort’s Arts and Sciences Champion this 29th Day of February.  Let word be sent to all baronies, provinces, and shires from Our Barony of Dragonship Haven. Scriptus et finitus est arbitrium iste in oppido Anno Societatis 54.”