At my first camping event, my good friend C took me around the site to see all the really cool medieval things. I was astonished at how creative and authentic some people’s camps were. In some places I really felt like I had travelled to the past.

One of the things that really struck me was the chairs. I know that may seem strange but the chairs seemed to make a huge impact in the ambiance of camp. I had very minor experience in woodworking, I took a class in… younger days, and I had made a couple of wooden chests for a friend to give away as a prize earlier that summer. Even though I didn’t have the skill yet, I knew someone that had all the working tools, (and knowledge) and I was inspired.

I researched different styles of medieval chairs. I had decided my persona was going to be norse but I really wanted to create an X-Chair which was later period. I found this site: Thomas Guild that showed some beautiful chairs (with museum pictures and art from manuscripts!!!) including  14th and 15th century folding x-chairs. Then I found a tutorial on instructables that showed me how to do it! It’s not a perfect replication but it will pass. 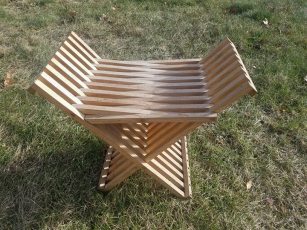 I did have assistance for this project, my mom’s boyfriend helped me use the tools and deceipher the instructions. He was fantastic in letting me do a lot of the work but answering questions and helping me along the way.

The chair I made was in oak because it’s a nice hardwood and oak trees were used for woodworking medievally. I left it unstained but have considered using linseed oil to protect it. I used modern woodworking tools including drills, saws, and sandpaper because it’s easier.

The chair turned out very sturdy and folds nicely and is comfortable if you can sit without a back to the chair. It got damp once and I had trouble folding it after that but once it was completely dried, it folds even better than before.

I would love to hear what you think!